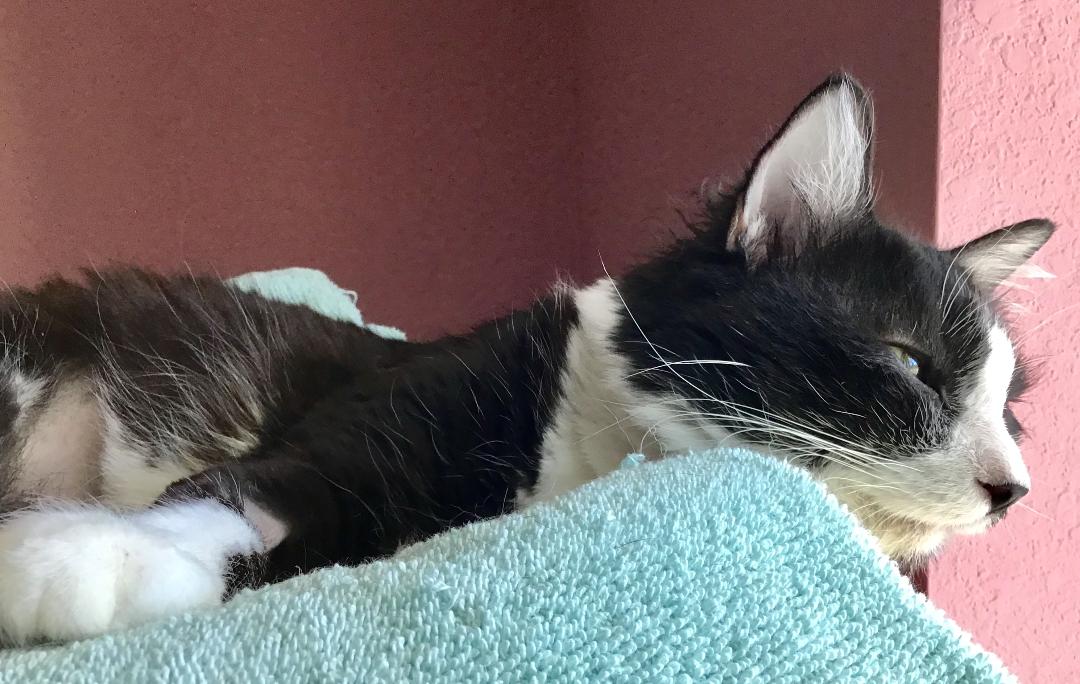 Lucky came to Green Valley Paws Patrol in 2017. He was approximately 8-10 weeks old, small, undernourished and weighing only 2.2 pounds. For a kitten he looked like he had been through a battle — face full of scratches, missing hair, mouth full of cacti needles and a large needle penetrating his stomach. He was lucky to be rescued and even luckier to be alive.

Within a day, volunteers were able to hold Lucky. He would hiss when being picked up but he cuddled in the arms of anyone who would hold him. Boy, did he purr with satisfaction! Soon after, Lucky was back at the vet because he wasn’t pooping. We discovered he had a congenital condition, megacolon. This disease makes Lucky lose his ability to defecate without medicine.

Since then, Paws Patrol has cared for Lucky throughout his ordeals: born with a megacolon; near death from a respiratory illness; asthma; scarring of his right cornea; and weakened immune system. Resiliently, Lucky continues to thrive and survive with medications throughout the day, a special diet and monitored bowel movements. In May, Lucky needed yet another surgery — removal of a testicle that was lodged somewhere in his body. The surgery was successful and donors from Go Fund Me helped make that happen!

During all that time, it was a Paws Patrol volunteer who adopted this special-needs cat. She gave him the necessary medical attention he needed and the love he craved. A few months ago, Lucky’s adopted Mom experienced her own serious health issues and can no longer take care of him. Paws Patrol is committed to Lucky and searching for someone who makes his health a priority as we do.

Help us continue to give Lucky a chance at life by buying a one-of-a-kind handcrafted Beading Divas bracelet or two and/or making a direct donation.