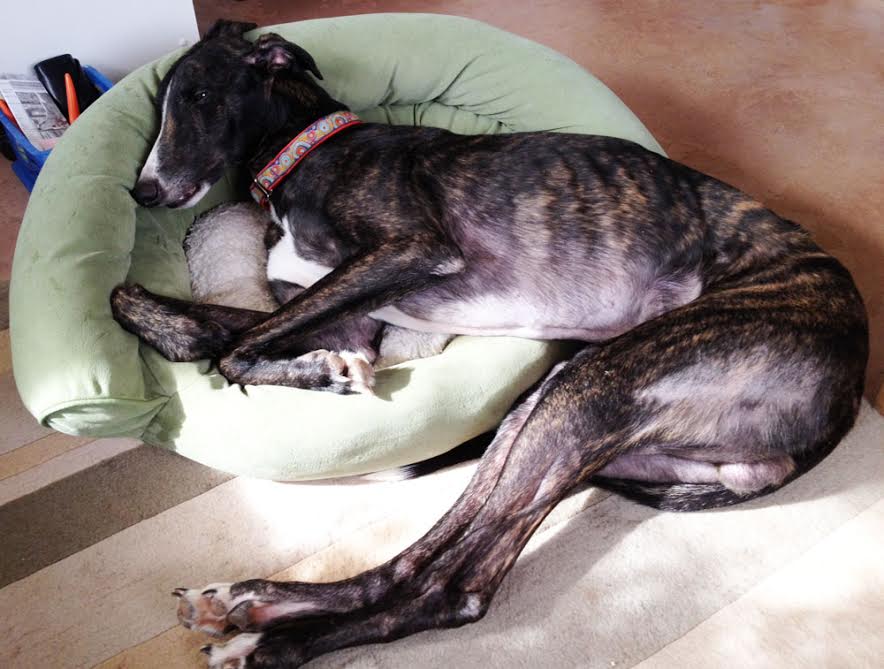 Broken leg, with cast just removed, he was a cautious greyhound, measured in every step he took, and every action he made. He came with the name Wayne which did not fit him.

He spent the first few weeks pooping in the house in the middle of the night because the dog door was just too alien and his stomach was so tied in knots from all that was.

He’d allow himself to be pushed, prodded and pulled through a dog door. But the thought of voluntarily putting his nose onto that clear piece of plastic and pushing? No way.  Hundreds of hounds had learned that dog door in minutes or hours. He did it his way. Brakes on.

His other concerns included the dishwasher which made gurgling noises so he refused to go in the kitchen. The TV had guns and dogs and screams, so the living room was verboten for a while.

Stairs? He’d obediently, but reluctantly, walk down them next to her, but as soon as they arrived safely at the bottom, and she’d release his collar, he bound back up them to the safety of up. There were definitely boogie men living in the basement.

But he slowly learned that the dog door took him to three fenced acres, which he loved to use as his own personal weaving and bobbing racetrack. The sage brush provided the obstacles in his zooming course, as he zipped through and about, joy flying from him.  And this boy could run. A broken hock almost sealed his death from a short career of running at the track, but once healed, and on Get Up & Go supplements, he bloomed and zoomed.

A creature of habit, he did everything at the same time every day. Routines provided him with a sense of stability.

Baby’s latest journey took him to his forever home. He’s living with little dogs, and many cats, and horses, and ducks and chickens. And, of course, some humans who love him. Because Love is all you need.

You can buy bracelets online via Etsy. All come with a dangling paw charm. Bracelets cost $20 + shipping & handling (the cost based on destination). 90% of every bracelet sale will be donated to Greyhound Gang.