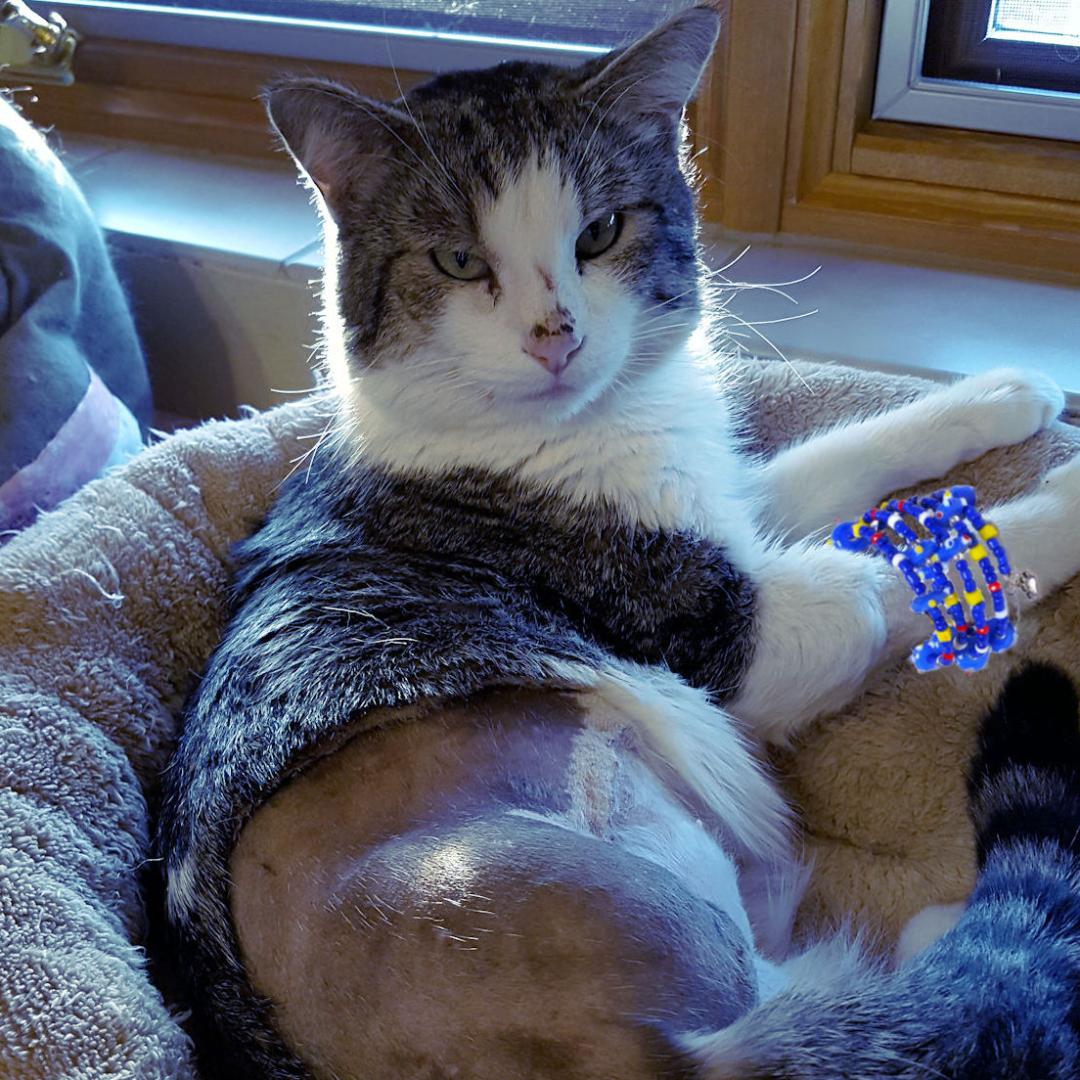 For the month of April, Beading Divas to the Rescue/Beading Divas Bracelets is excited to be fundraising for Paws Patrol in Green Valley. Their mission is:

It was another challenging day for Scooter—find food and water, stay out of the path of speeding cars, watch the sky for hawks and owls and watch the ground for coyotes. Luckily Scooter had found a nice lady who put food and water out for him to eat and drink. That was great, but the rest of his day was not so good.

According to the vet, either a wild animal had shaken Scooter or he had possibly been hit by a car. He had a dislocated right rear leg, two minor abrasions at the site, torn ligaments in his ankle as well as missing bone. There were two options: amputation or trying to fasten the bones in place. A second opinion by a surgeon in Tucson confirmed that saving the leg was a risky venture. Two tendons were torn and a piece of bone connecting the ankle and tibia was missing. With the surgery, Scooter would risk infection, need two or three months of kennel time to heal, possibly more surgery later, and would most definitely suffer from early arthritis. The decision was made to amputate.

Through the whole ordeal, Scooter has been a gentle and loving cat. He obviously had a family at one time as he put his immediate trust in the people who took him in, certain that they would love and care for him.

Scooter has now lost his leg. He is currently in a foster home where he will remain until he is ready for adoption. He is adjusting well to getting around on three legs; he is becoming quite playful. He loves to roll over and have his belly rubbed. He is somewhat interested in balls and laser pointer and he can race through the house at a remarkable speed.

Scooter has many more years of love and affection to give and deserves the chance to achieve his potential as a faithful, loving companion. Might that someone be YOU? He is quite leery of dogs but a male kitten or female adult kitty or two might be fine. We do not anticipate any future vet bills related to his amputation. He’s ready for a forever home.

At this point, his medical bills have come to $3,712. Paws Patrol has received $2,000 of donations and grants toward these bills but need help with the balance. BUY LOTS OF BRACELETS and/or make a direct donation to Paws Patrol

One-of-a-kind bracelets are handcrafted by creative volunteers and come with a dangling paw charm. Bracelets cost $20/no tax. For bracelets that Paws Patrol sell one-to-one in person, they receive the entire $20. For bracelets sold online or at Silver Sea Jewelry and Clues Unlimited Mystery Bookstore, the cats receive $18. Either way it’s a win-win for cats like Scooter.