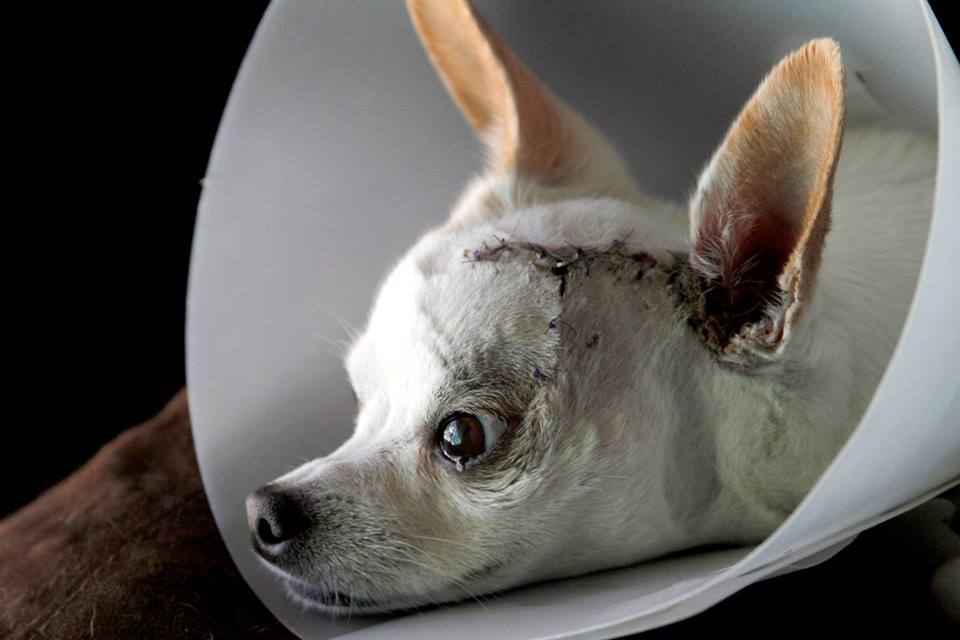 BARK Tucson goes the extra mile to save a dog

Meet Skitters. BARK picked this Chihuahua up at PACC right before Thanksgiving. Poor Skitters was surrendered to be euthanized due to a massive head wound.

ALLEGEDLY the surrenders said that an ignored abscess ruptured, but it appeared as if something inflicted violence on the dog’s dome. The result: a soda-can circumference area of skull exposed and a ear dangling.

Immediately it was noted that Skitters still was completely lucid, had a good appetite and loved affection.

Over the next few days Dr. Wilcox and PACC staff took the time to remove all the stinky dead skin from the wound, clean him up and begin patiently stretching the skin back together and dosing the guy with some quality medication to keep infection and pain at bay.

Fast forward past one vet office who promised an operation but then took a quick look at Skitter’s exposed skull and recommended that we have him euthanized immediately. Then BARK found Dr. Laudonio and his staff at ACACIA ANIMAL HOSPITAL , who had previously done an awesome job fixing a difficult leg break a few years back (Khalessi aka Broken Leg Dog) adopted through BARK.

For the month of February, you can buy bracelets to benefit BARK Tucson. Bracelets are one-of-a-kind made from donated beads and come with a paw charm. Support a Tucson animal rescue while dolling up your fashion sense with style. Check out a big selection online…