Inspirations: Am I Boring My Dog? Book

Karyn Zoldan sat down with Frankie-the-dog to interview him about the new book which he recently inspired his companion to write.

KZ: Frankie, you’re pretty famous. Has it gone to your fluffy little head?

Frankie: I’m publicity shy — okay, shy period — so I’ve been hiding out in Tucson, avoiding the puparazzi. I’m not sure how I’ll deal with it if my YouTube video goes viral or we’re invited on Oprah.

KZ: Please tell me a little bit about your life before you came to Edie Jarolim’s house?

Frankie: I don’t like to talk about that. It’s hard to imagine how the people I was with could have abandoned me after I spent five years with them. I’m adorable — let’s face it — and housebroken. Not to mention extremely bright. What could I possibly have done so wrong as to make my people leave me to fend for myself on the streets of Tucson?

KZ: According to Jarolim, owning a dog inspired her to learn everything she could about dogs and to write a book – Am I Boring My Dog?   Are you ever bored?


Frankie: Well, you said it. She sits there at her computer and writes instead of scratching my tummy, feeding me, playing with me, and otherwise tending to my every need. Of course I’m bored sometimes, though I can always lick my privates to entertain myself. I admit she does take me on long walks and tosses my squeaky chile around with me quite often.

KZ: What is the book about? Why would everyone want to read it?


Frankie: It’s a guide, in the form of 100 questions and answers, for dog owners who are as clueless about dogs as Jarolim was when she first got me in 2004. People seem to think it’s very funny and informative. I would like it far better if it were liver flavored.

KZ: You have diabetes. What’s that like? What’s your regime?  Does it hurt?  What are your limitations, if any? Do you pee on strips of weird paper?  Sorry to be so graphic but inquiring minds want to know and canines aren’t usually hung up on urinary and scatological topics.


Frankie: Diabetes doesn’t hurt, if that’s what you’re asking — except for those darned insulin shots, which I’ll get to in a second. If my blood sugar goes up, I get pretty thirsty and have to pee more often than I used to have to.  Once I peed in bed — that’s how Jarolim knew I had a problem, because I’m generally a very self-controlled dog.

Here’s our routine: First thing in the morning, usually around 5 a.m., Jarolim follows me around the backyard with a kidney-shaped dish (pretty appropriate, ha) and collects my urine. I sometimes run to out-of-the-way places and try to pee against the fence so she can’t collect anything — it’s fun! — but she usually manages to get at least a few drops. Then we go into the house, where she puts on the microwave timer for 30 seconds and dips a strip of paper into the pee. It turns colors and she either cheers or curses depending on the shade.

Then she gives me my food — it’s high fiber, no grain, low fat. Getting my diet established was one of the key problems, and she’s always tinkering with it. While I’m eating she puts the insulin into the needle — slightly less if the color of the pee strips is light, more if it’s dark. I’ve taken to cringing to freak her out when I see the needle. It only hurts occasionally, but you never know when that’s going to be. Besides, she’s nicer to me and give me a better treat if  I look all pitiful and scared. I usually forget to do my cringing routine at night, though — which is why she decided I might be faking.

12 hours later we go through the same ritual again. It doesn’t bother me — we dogs like structure — and I think Jarolim is used to it, but at first it was difficult for her to get used to not being able to go out at certain times. I say she goes out too much anyway — going out any time without me is just wrong.

I don’t have any limitations except for my diet. In fact, I get longer walks than I used to because the vet said regular exercise is good for me. I’m a svelte 9 pounds now, down from 11.

KZ: I occasionally see you on KVOA channel 4 being interviewed. One day you were wearing a Hawaiian shirt and looked really buff. How did you get a TV gig? 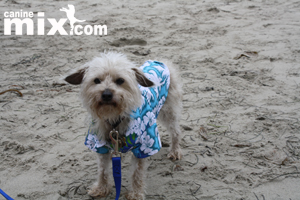 Frankie: Connections. It’s who you know in this town, like it is everywhere. I got the gig because one of Jarolim’s friends was a friend of the producer. It didn’t hurt that Jarolim was a nationally-published travel writer — she wrote Arizona for Dummies, among other guidebooks, and had stories in magazines like National Geographic Traveler —  before she wised up and started writing about dogs. So it made sense for her to do a pet travel segment.

And, as you know, the camera loves me. I think Jarolim brings me along as a distraction, to keep her from worrying about what to wear. Who cares what she looks like when I’m all duded up in my Hawaiian shirt?

KZ: You’ve done a lot of interesting things in your life. What was it like to ride in a hot air balloon and spin into outer space?

Frankie: Jarolim told me not to tell but anyone who knows me knows I’m not really fond of car rides. Air travel? Fuggeduboudit! So it was all an illusion, done with smoke and mirrors — ok, I think they called it a green screen. My favorite part was that Jarolim was crouched down behind a table, holding my butt while these two other humans were filming me. Ha!

KZ: Do you have any advice for dogs and their companions to better enjoy life?


Frankie: You humans have an expression: Read my lips. Well, in our case, it’s read my body language. If my tail is between my legs, and I’m flicking my lips with my tongue, it means I’m nervous, get me out of this situation! If I growl, don’t shut me up; otherwise I’ll go straight to bite next time.

It’s not rocket science. Just learn a few cues. I mean, we’ve got to figure out your language to try to guess what the heck you want. You could learn some basics too.

Aside from that, all we dogs want is company, exercise, and, of course food that doesn’t contain crappy ingredients — corn byproducts, rotten stuff, chemicals like melamine…. — that can make us sick. Again, it’s not that complicated.

KZ: We’re all excited that the book is now for sale a/o September 1.  Are you doing any local book signings?  How can people buy the book?

Frankie: Well, both of us are going to be on stage on September 10 at the Hotel Congress as part of the Odyssey Storytelling series. The show starts at 7 p.m. I’m afraid Jarolim won’t have any books on hand but she’s going to give everyone the poop — ha, ha! — on how the book came to be written.

And if people order on line from the Amazon link of Jarolim’s blog, they get a good price and she gets a few more pennies (literally).

But the first formal signing — and a hugely fun event, which will include a raffle to benefit the Southern Arizona Humane Society, is on September 18 at Loews Ventana Canyon Hotel. From 5:30 to 7:30 p.m. there’ll be a Yappy Cocktail Hour, and Jarolim will walk around, schmoozing and signing books. Then from 7 to 8 p.m. there’ll be a more formal reading/Q & A. Dogs are welcome to both! Yes, you read that right. No more species-ist exclusion!


KZ: Anything else you want your adoring public to know?

Frankie: Please adore me from at a distance at first, and when you approach me do it carefully. Yes, we’ve established that I’m cute and I know it’s tough to resist petting me. But you don’t like to be touched without permission, do you?